The United Kingdom, made up of England, Scotland, Wales and Northern Ireland, is an island nation in northwestern Europe. England – birthplace of Shakespeare and The Beatles – is home to the capital, London, a globally influential center of finance and culture. Are you planning a vacation to the UK and you are confuse about the best places to visit in UK we have got you covered here. The best places to visit include everything from beautifully preserved country castles, to its many world-class art galleries and museums. The most exciting thing about visiting the UK is that it is so easy to explore, get fascinated with our list of 6 most beautiful places to visit in the UK.

You cannot think of travelling to the UK without stopping in London, because it has so much that you would love to see as the nation’s sprawling capital boasts plenty of attractions to keep you busy. You also stand a chance of learning UK’s rich history. The Tower of London should be a sure stop when you get to London. Located beside the spectacular Tower Bridge on the banks of the River Thames, this former palace and prison includes highlights such as the iconic 1,000-year-old White Tower, with its fascinating displays of armor and weaponry, and the Jewel House, home to the Crown Jewels.

Lovers of Britain’s Royal Family will want to head to Buckingham Palace, where you can enjoy the colorful pomp of the Changing of the Guard. amongst others are the Big Ben and the Parliament Buildings, as well as Westminster Abbey, South Kensington, home to the city’s best museums, including the Victoria and Albert Museum and the Natural History Museum and a bunch of really amazing places in London to visit.

Edinburgh is also one of the UK’s most visited destinations. Above the old city on a rocky promontory, Lies the 13th-century royal fortress which includes the famous One O’clock Salute, held daily at Half Moon Battery; the Scottish Crown Jewels in the Royal Palace; the Scottish National War Memorial; and the famous Stone of Destiny (the Stone of Scone), only returned to Scotland after being held for 700 years in London. Also to explore are the Old Town’s Royal Mile with its fine architecture, boutique shops, cafés, restaurants, and art galleries, as well as the splendid old Palace of Holyrood house and Royal Botanical Garden and the National Gallery of Scotland.

this place was named after its famous Roman Baths, a city so beautify that it attracts lots of visitors to its healing waters for more than 2,000 years , fountain gushing from three hot springs, the water-known to consist of 43 different minerals, hence its curative properties-travels upwards some 3,048 meters at a rate of 275,000 gallons per day, before spilling out at a consistent 46.5 degrees Celsius. though impossible to bath in the original fountain a number of nearby spas-most notably the superb Thermae Bath Spa-offer guests the chance to enjoy the city’s famous waters. As a plus you will find No.1 Royal Crescent which is now a museum that offers a fascinating peek into life during Georgian times.

Stonehenge has been a place of pilgrimage for more than 4,500 years. It was believed to have been erected as a place of worship, but these days, the crowds consist of tourists drawn by the sheer scale of this magnificent monument to man’s imagination. It’s an amazing site to behold, covering an area of more than 20 square kilometers and boasting a state-of-the-art visitor center, which offers a beautiful glimpse not only into the construction of Stonehenge but in history, the medieval city of Salisbury, located just 16 kilometers south of Stonehenge where you will be gifted with a chance to visit one of the country’s most famous cathedrals, dating back to 1220 and home to an original Magna Carta.

The town of Windsor is located at a short train ride west of London and presents lots of fun things to do for tourists. The Thames-side setting and the many medieval half-timbered buildings along its quaint old cobblestone laneways, it’s also home to spectacular Windsor Castle, the most famous of the UK’s royal castles. This grand old castle has served as the summer residence of British royalty for more than a millennium and is the world’s largest occupied castle. places to explore includes  splendid State Apartments containing the Queen’s Gallery and dining hall, each with magnificently painted ceilings and woodcarvings, and St. George’s Chapel, famous as the home of the Knights and Ladies of the ancient Order of the Garter.  Legoland Windsor, is a fun family resort set on 150 acres of parkland and just a short bus ride from the town center, and Royal Ascot, the UK’s most famous horse-racing venue.

Occupying about 1,287 square kilometers of pristine countryside, the exquisite Cotswolds’ is one of the most creative corners of the UK. A trip west of London and close to the popular tourist attractions of Bath and Bristol, the Cotswolds’ includes some of the best parts of the counties of Oxford shire, Gloucestershire, Somerset, Wiltshire, Warwickshire, and Worcestershire.

The most popular ways to do this is via the area’s extensive trail network, including the excellent 16-kilometer-long Cotswold Way. Other fun things to do include horseback riding and biking, or simply soaking up the history of popular market towns such as Castle Combe or Tetbury.

Covering an area of 1,448 square kilometers is another slice of beautiful English scenery: the Lake District National Park. Encompassing 12 of the country’s largest lakes (Windermere and Ullswater are the biggest), this region is another region of the UK that’s great to explore on foot thanks to its more than 3,218 kilometers of trails. 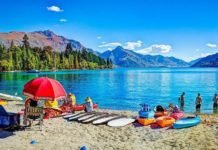 Top 5 Countries to visit after the Coronavirus Pandemic

Usage of Super Tucano Jets to Fight Terrorists in Nigeria.

Amarachi - January 4, 2022 0
Super Tucano jets to fight insecurity in Nigeria. Nigeria is faced with insecurity and terrorism and its been ongoing for so long in our...

Sanwo-Olu Pleads with Nigerians to stop Criticising the Country

Bayelsa: Pastor, 5 others Die on New Year’s Eve in Boat...

Independence Day Celebration, 2021: The Blood of Innocent Civilians on our...