Northern Nigeria bleeds! 4 days ago a commercial vehicle going to Kaduna was attacked in Sokoto by bandits, over 33 adults were in that vehicle and kids too, a woman who had 8 of her family members in the vehicle who narrated the incident died afterwards, she watched all her family members die and no one came to their rescue.

Young women and girls are raped everyday in the north, they are raped not once but multiple times, no one is paying attention to them, they don’t even believe their stories, they are not given medical attention, neither are they given emotional support, they are just in the north surviving and waiting for another day to be raped and brutalised by terrorists.

A lot has been going on for so long and we all fold our hands and do nothing, we don’t talk about everything, we are selective of the things we talk about, we are concentrating on just an aspect of all the horrible things happening in society and paying deaf ears to others.

I watched a lady express her pain and frustration on social media as she lost a loved one. Who was not just killed but was raped by 8 men. I can’t even imagine the pain of this woman. In her words she said “Today I am standing as a mother, a wife, a sister, a friend, today,  I lost someone very dear to me, raped by 8 men killed and for crying out loud what wrong have we done to you, to deserve a leader like you”.

Indeed, what crime did we commit? We did no wrong for electing our leaders, voting our leaders was never for them to inflict pain on us and treat us like animals. The northern part of Nigeria is bleeding, people are dying, insecurity is a big case. People are being killed  and no one cares.

Some days ago, I read in the news of how bandits stormed a particular location in the north where people were celebrating a child’s naming ceremony only for the so-called bandits to throw this child into a boiling pot and ask the people to eat the child. I do not know how true this is, because I can’t even imagine a human being masterminding this act. That’s the height of wickedness and cruelty.

The trauma this would bring, just put yourself in the shoes of those people who were forced to eat the body of an innocent child, how do you live with this? And with all these happening I find it difficult to believe that we are going to have a better Nigeria.

No, I doubt this because our leaders are allowing these bandits to be cruel to us and force us into becoming terrible people. We say we do not want more bad people in our society but we can’t even deal with the bad people terrorizing us. People are dying but our leaders are attending book launches, going on vacations, buying cars, and private jets. They are living well while civilians suffer.

We are paying attention to power. Everyone wants to get a chance to be a leader but do nothing when given the opportunity. The lives of northerners also matter. There are innocent people in need of attention and protection. Can our leaders do something about insecurity and be intentional about this? 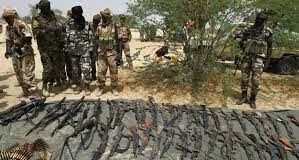 Amarachi - July 7, 2021 0
Still a fight against Boko Haram. It was reported that Troops of 195 Battalion, Sector 1 Operation Hadin Kai, in conjunction with Civilian Joint...

Housing in Nigeria: Why is it so Hard for Women?

12 Women in Bayelsa Arraigned for using Charms to Stop an...