Ohanaeze Ndigbo worldwide has earlier informed or rather warned Nigerians that there will be no elections in 2023 if President Muhammadu Buhari fails to release Nnamdi Kanu in 2022.

You must be aware fo the tussle between Ohanaeze Ndigbo and the President of Nigeria, the case has been in court for a while now and just when it looks like the igbo leaders are finally having a dialogue with the president we are back to this statement of not having an election in the South-east if Nnamdi Kanu is not released, Nnamdi Kanu is the indigenous leader of Biafra.

In a statement signed by Mazi Okechukwu Isiguzoro , the Secretary-General of Ohanaeze, the group said that Igbos must be prepared for the horrible and shocking things ahead, while they hope for the promising future, stressing “there will be attempts to dash Igbo’s political hope for 2023.” Igbos will not be given the opportunity to fly the All Progressives Congress, APC, and the Peoples Democratic Party, PDP, presidential flags but added that natural occurrences will not only favour Ndigbo but re-position them. Ohanaeze, Ndigbo are destined to emancipate Nigeria from all ailments and maladies withholding her to regain her global status of Giant of Africa.

“President Muhammadu Buhari should release Nnamdi Kanu in 2022, to authorize peace, security, and stability to return to southeastern Nigeria.

“But if he’s not released in 2022 as being championed by Northern leadership (Arewa consultative forum and Northern Elders Forum), there will be no 2023 elections in Eastern Nigeria with the evidence of sit-at-homes in the East and it will deteriorate the security challenges of Southern Nigeria.

In the statement by the secretary of the Ohanaeze Ndigbo group he further said that “Buhari cannot shy away from releasing Nnamdi Kanu, it will help to obliterate the negative impression of Nigeria in the eyes of the International Community, and restore the dignity of Nigeria, and re-admit her amongst the commit of Nations.”

“In 2023, we are committed to the Nigeria President of Igbo extraction as a result of addressing the equity, fairness and obeying the gentleman agreement of Rotational Presidency reached by Nigeria’s Patriots in 1999, which has helped to stabilize the country.

“It will be unwise to scuttle it now it favors Ndigbo, we will commence the political journey of 2023 with persuasive visits to all the geopolitical zones of the country by January 13, 2023.

“But in the case of conspiracy, sabotage, and denial of Igbo the 2023 Presidential tickets in APC and PDP, both the conspirators and saboteurs will only be available for the doomsday and may not superintendent the affairs of the country in 2023, as secessionist groups will be strengthened and unified by the evidence of political neglect, marginalization, and enslavement of Eastern Nigeria.” Ohanaeze Ndigbo they are really out for a serious business and they also expect the president to respond to this urgently.

Formal President of Nigeria, Olusegun Obasanjo Urge Elders in Politics to Step Down for the Youths 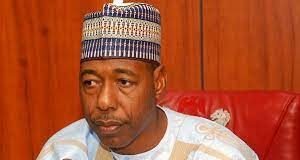 Amarachi - July 7, 2021 0
The governor of Borno state, Babagana Zulum says his administration has saved over N400 million from the verification of teaching and non-teaching staffers of public...

Kaduna Train Attack: “Pray for me”, the Last Words of Doctor...

No, is a complete sentence. A message to serial debauchers.