It is no longer news that the governor of Edo State, Obaseki sacked some sports workers. There was a massive protest around the Samuel Ogbemudia Stadium and adjoining streets on Wednesday as 513 workers of the Edo State Sports Council were relieved of their jobs by Governor Godwin Obaseki with effect from March 21.

The sack was contained in a memo dated March 4, 2022 and those affected were drawn from junior, senior and management categories of workers

The memo stated that while the affected staff would be immediately paid their one month in lieu of notice, their pension payment would commence in April 2022.

Formal President of Nigeria, Olusegun Obasanjo Urge Elders in Politics to Step Down for the Youths 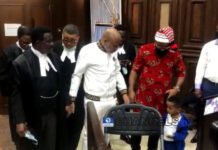 More than just crushing on Korean actors: The Nigerian twins who...

Amarachi - June 14, 2020 0
They told me about the rush at home all the time, trying to finish up their tasks for the day so they could jump...

President Buhari Vows to End Terrorism after the Zamfara Massacre